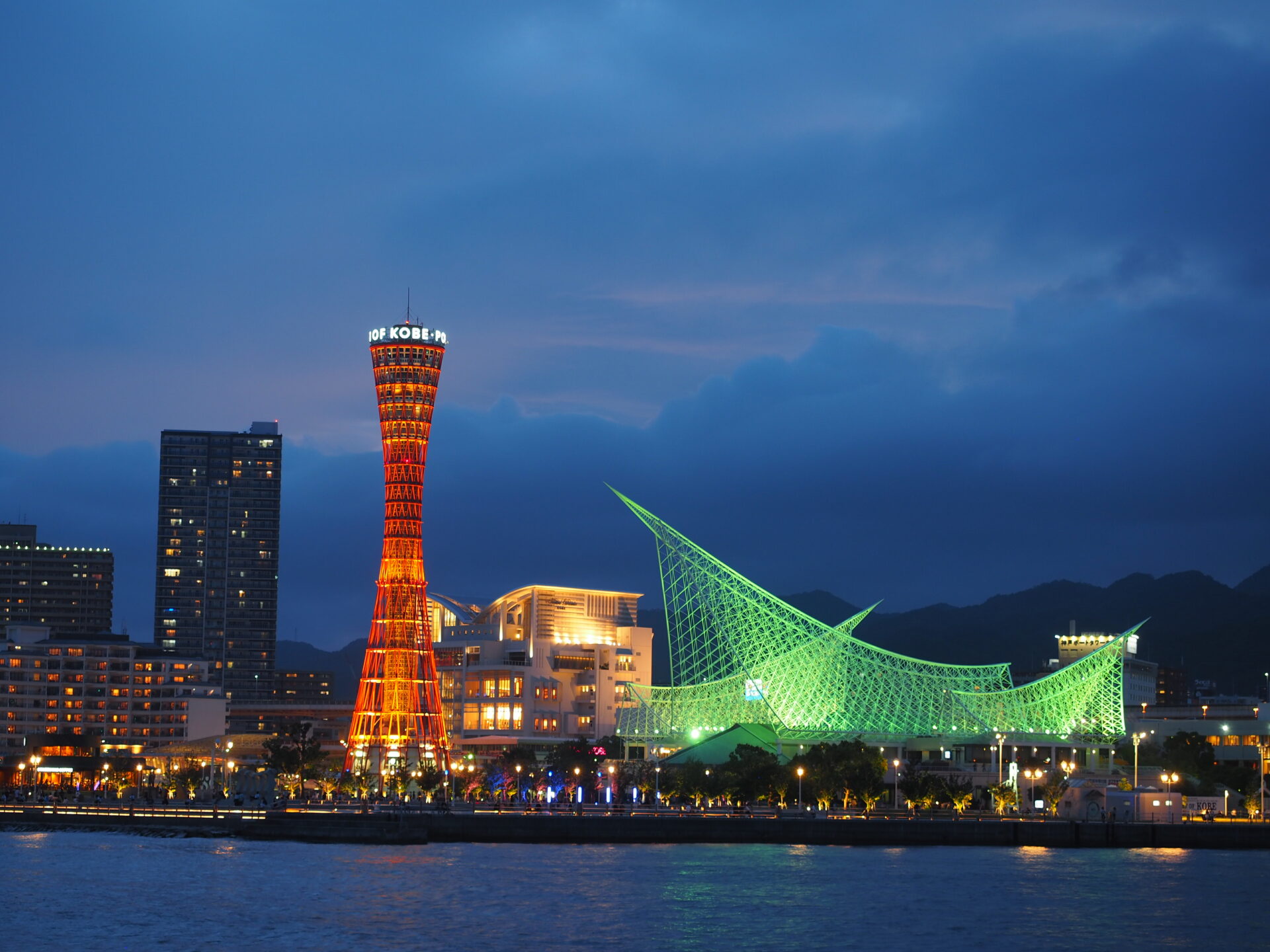 This seaside spot features a number of symbolic architectural pieces – including Kobe Maritime Museum and the Port of Kobe’s landmark, Kobe Port Tower. Visitors can enjoy the harbor town of Kobe under the refreshing sea breeze, whether strolling around the neighboring Harborland shopping district or going on a sea cruise. 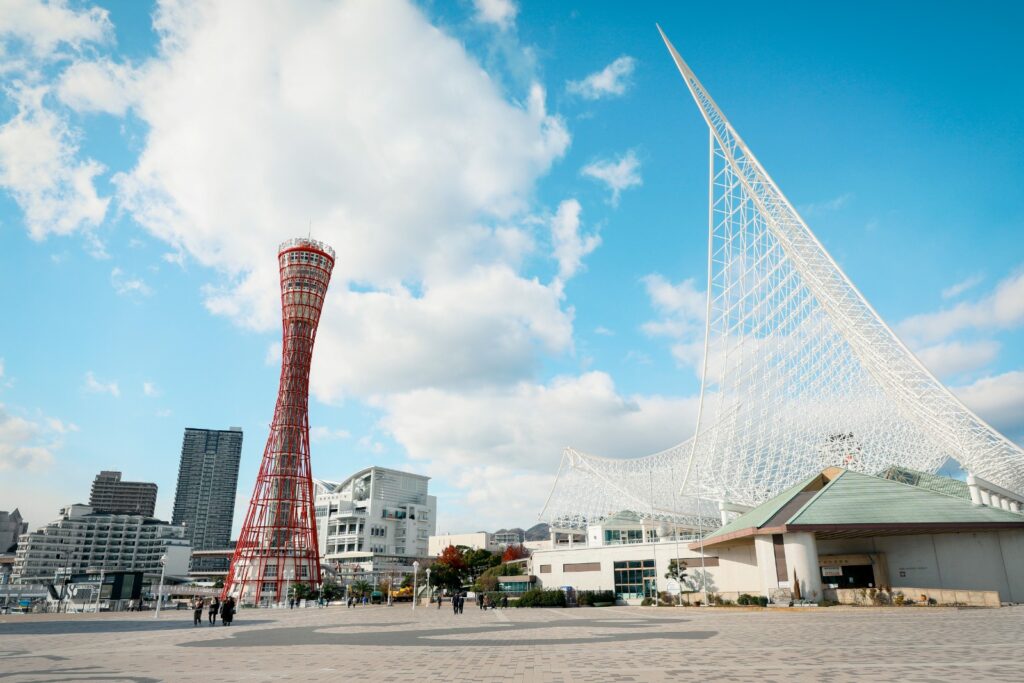 閲覧できません (Forbidden access)
Meriken Park was opened in April 1987 to commemorate the 120th anniversary of the opening of the Port of Kobe. The size of the waterfront park spans 15.6 hectares. It was built by reclaiming the land between Meriken wharf (the third wharf established in 1868) and Naka Pier where the iconic Kobe Port Tower stands. The US Consulate stood near the entrance of the wharf, hence why the area became known as “The Wharf in Front of the US Consulate.” The name Meriken wharf comes from the word “American,” which sounded like “Meriken” to the Japanese ear.
指定したウェブページを表示することができません。
入力したURLや値が正しくない可能性がございますのでご確認ください。

The server refuse to browse the page.
The URL or value may not be correct. Please confirm the value. 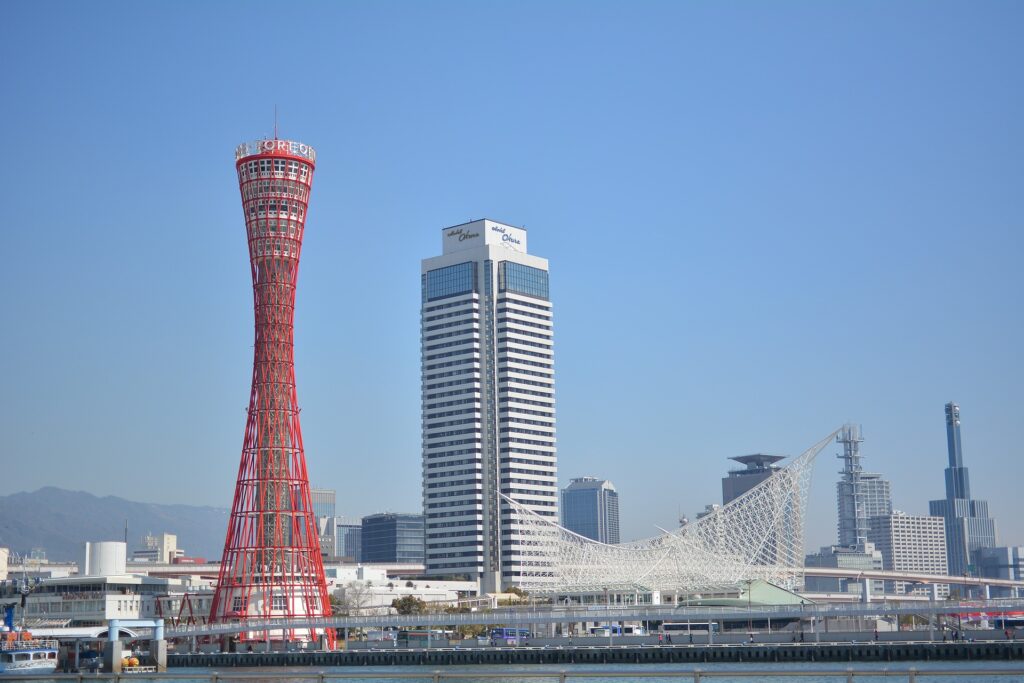 Situated west of Kobe’s city center, Harborland is a prominent shopping and tourist area, complete with large shopping complexes including retail, restaurants, and amusement spaces. Strolling along the Takahama quay near the cruise ship Concerto is ideal whilst taking in the sea breeze. 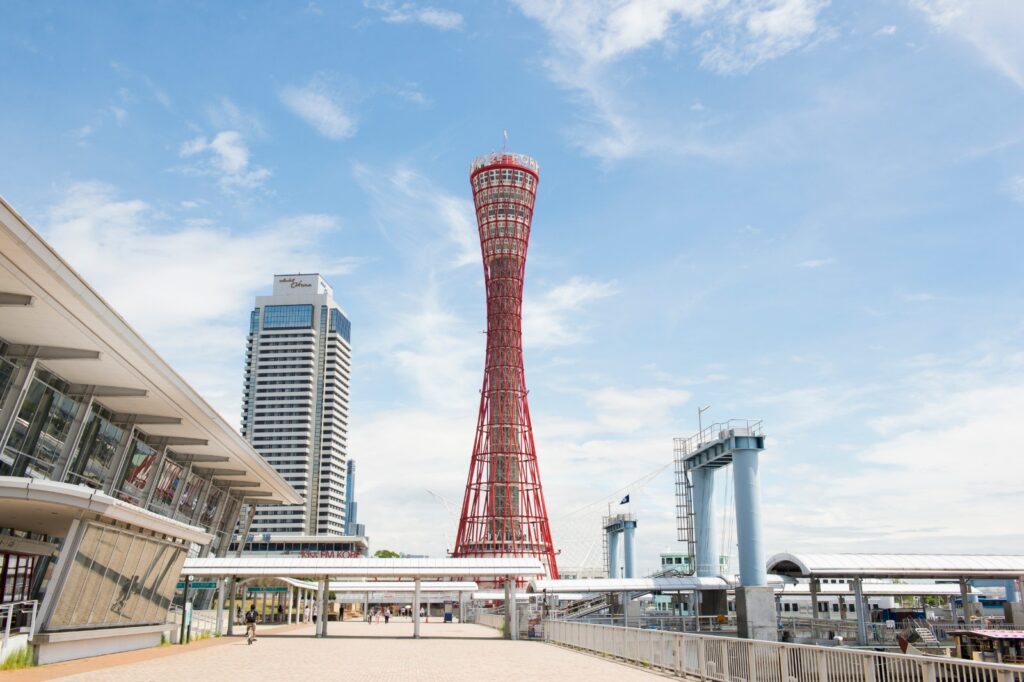 Kobe Port Tower was opened in 1963 to promote the recovery and development of Kobe Port. Chujiro Haraguchi — the first chairman of the Kobe Port Promotion Association (now Port Promotion Department of the Kobe Tourism Bureau) and the 7th mayor of Kobe — visited Rotterdam in 1959 where he was inspired by the Euromast, a tower which overlooks the port. At a time when demand for the expansion of maritime transport and trade grew for Japan’s economy and industry, Mayor Haraguchi envisioned a tower that would be a landmark appropriate to the Port of Kobe and that which represents Japan. Faced with many challenges, Kobe Port Tower was required to meet a number of strict requirements. This included demands for the world’s most unique and unparalleled design, a tower unrivaled by any other city while still appealing to universal values and one that matches the beautiful city of Kobe as a symbol loved by the citizens. Kobe Port Tower boasts structural integrity with the world’s first pipe structure, which is based on an elegant, hyperbola-shaped tsuzumi (hand drum) design.

Kobe Port Tower was the first in the country to be illuminated at night using uniform lighting technology. Standing at 108 meters in height, a neon sign reads “PORT OF KOBE” near the tip of the tower. As a beloved landmark of Kobe, Kobe Port Tower has watched over the changing landscape of the port through major turning points — such as the construction of Maya Pier and Port Island, the containerization of maritime transport, the emigrant ships to Europe and America, and the construction of Rokko Island. The tower has also developed with the times, bearing witness to the history of the Port of Kobe through the opening of “PORTOPIA” Kobe Port Island Exposition following the oil crisis, the construction of Meriken Park, the damage and reconstruction from the Great Hanshin-Awaji Earthquake, and the opening of Kobe Airport.

Kobe Port Tower is currently undergoing large-scale renovation, with plans to reopen in the summer of 2023 to mark its 60th anniversary. 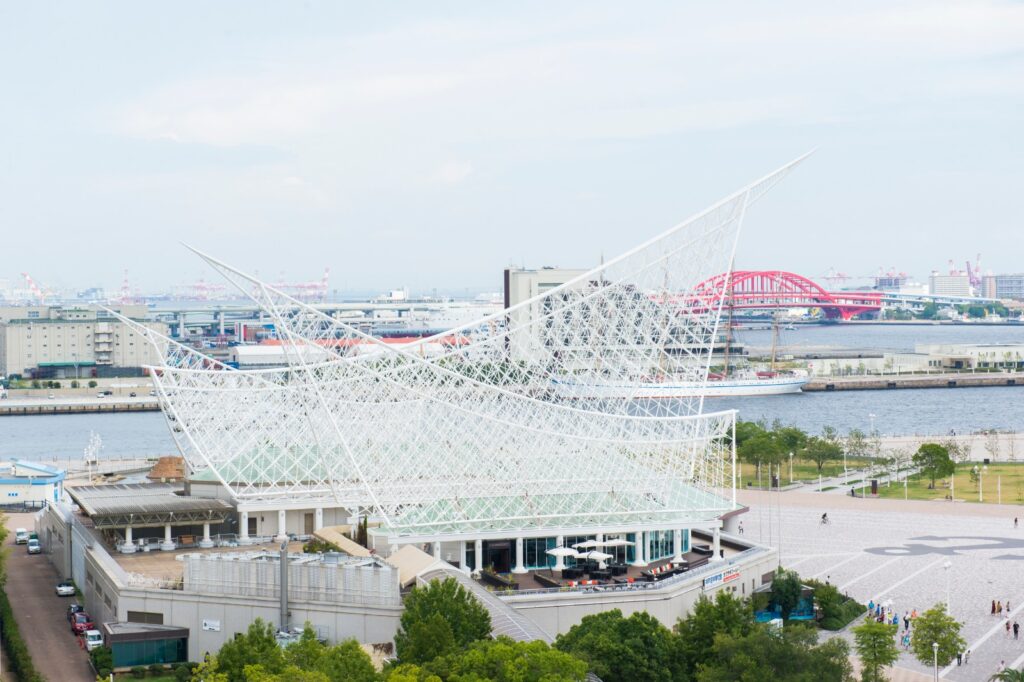 The Kobe Maritime Museum was opened in 1987 to commemorate the 120th anniversary of the opening of the Port of Kobe. Based on the concept “Kobe begins from the sea and port, and sails into the future,” the characteristic large roof consisting of a white space frame evokes the image of waves and a ship setting sail in the vast ocean. Kawasaki Heavy Industries, which has advanced with the development of the Port of Kobe, has been operating the corporate museum Kawasaki Good Times World alongside the museum since 2006. In February 2002, the museum was renovated under the theme “Journey of Kobe and the Port” to showcase the development of the port and its connections to help foster future generations of maritime personnel. The museum captures the Port of Kobe’s expansive role as an international port and invites visitors to immerse themselves in the dynamic space filled with life-scale exhibits, and longing for the sea, ships, and the port. 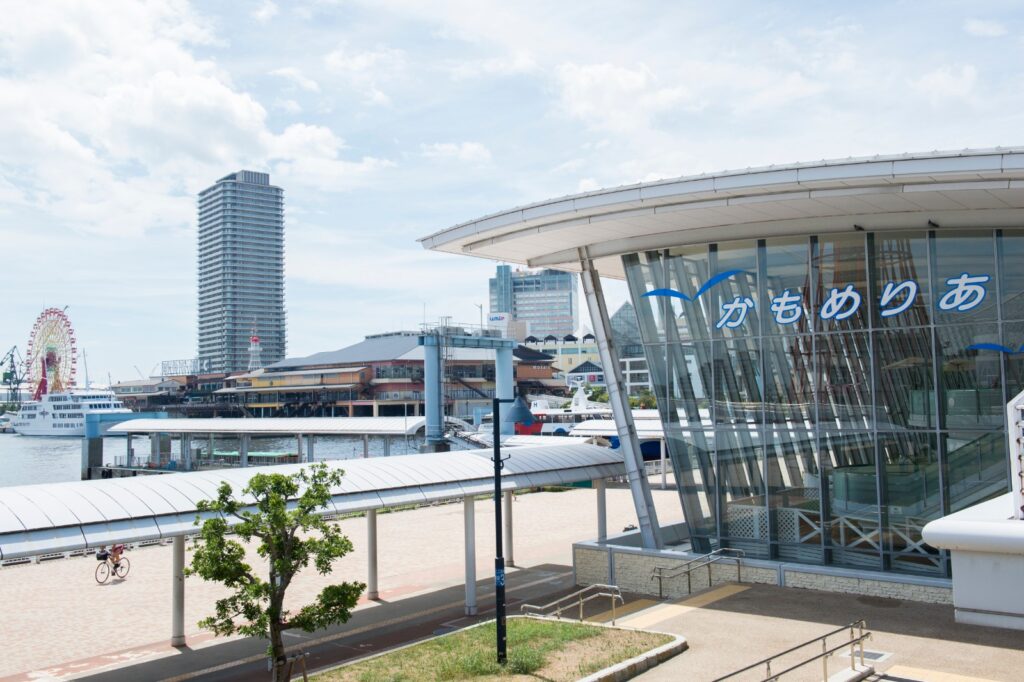 Located between the middle dock by Port Tower and Harborland, the Naka Pier Central terminal opened in the Nakatottei west area in March 1998. Cruise ships regularly sail around the Port of Kobe. The terminal’s barrier-free design aims to make the facility accessible to all visitors. With Braille signages and audio guides in place, the terminal is also accessible for people requiring special assistance. 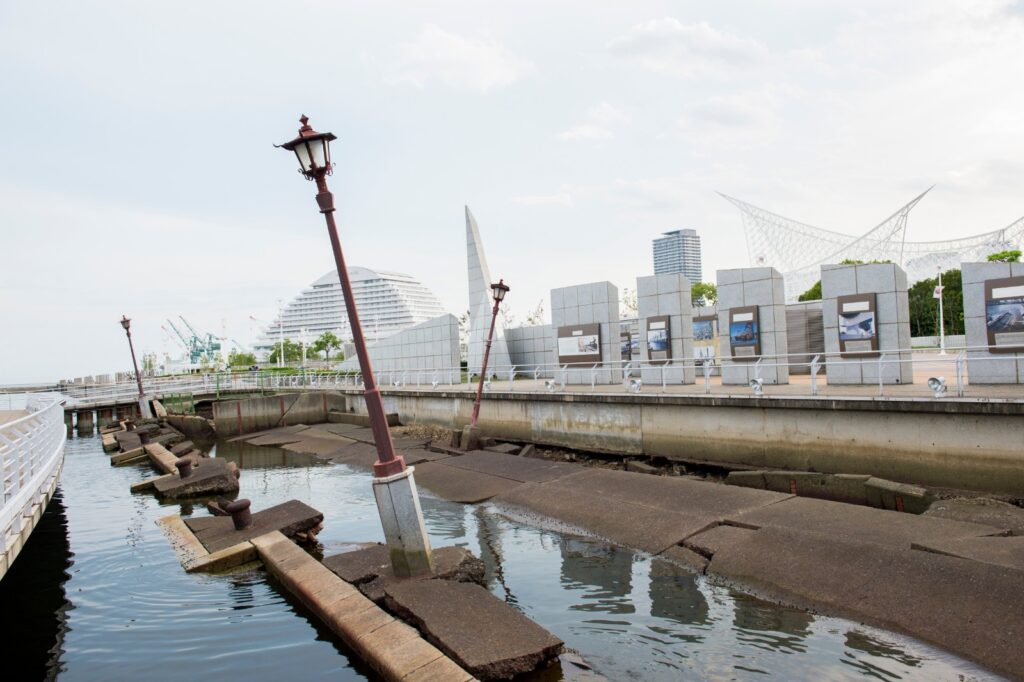 This memorial park displays a 60-meter section of the Meriken wharf in its untouched state, which was damaged as a result of the Great Hanshin-Awaji Earthquake. Exhibited materials including models, video footage, and photo panels document the Port of Kobe at the time of the earthquake and the recovery process. Visitors can see and experience the tremendous force of the earthquake. 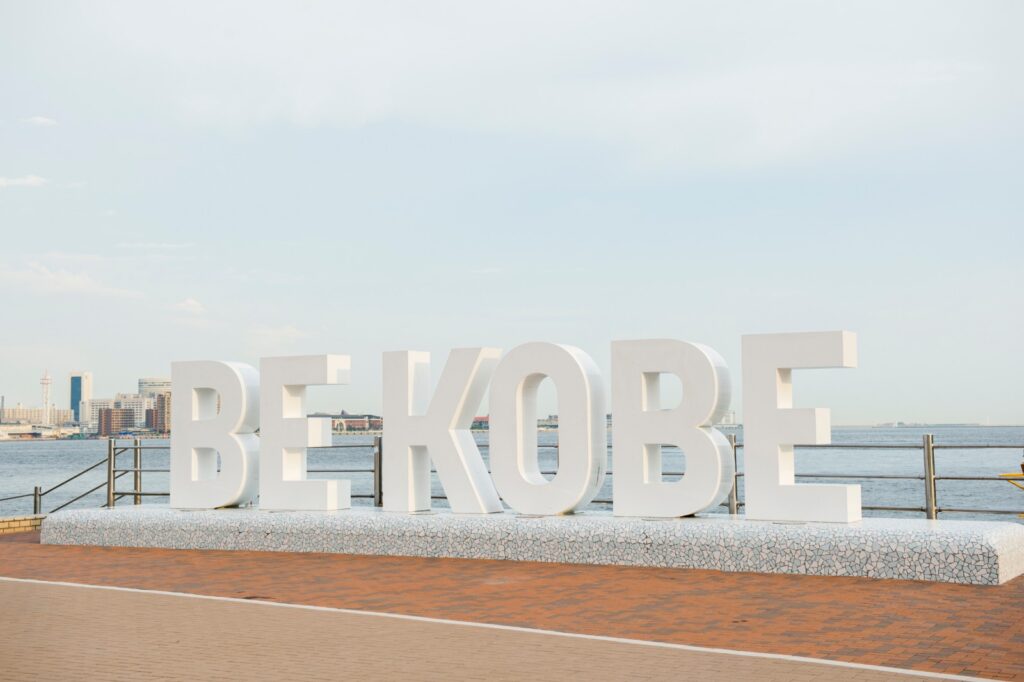 The BE KOBE Monument was established in 2017 to commemorate the 150th anniversary of the opening of the Port of Kobe. It is one of the most popular photo spots in the bustling park. Bringing the message “Kobe’s appeal is the people,” the phrase “BE KOBE” displays civic pride to mark 20 years after the Great Hanshin-Awaji Earthquake. “BE KOBE” carries love and pride for the city of Kobe, and honors those people creating new possibilities. 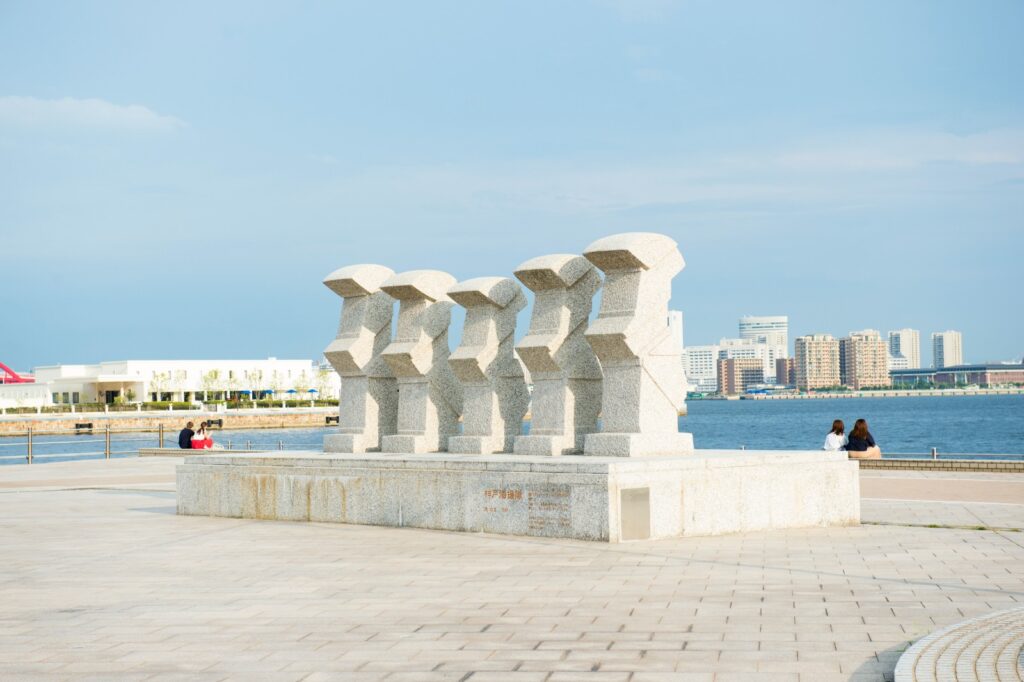 In 1990, Takenaka Corporation marked its 90th anniversary since its founding in Kobe. As part of this project, the Kobe Kaientai (“Maritime Support Force”) Monument was donated to the city of Kobe in 1991 by the world-famous sculptor Masayuki Nagare. He named the monument “Kobe Kaientai” in memory of the young men and their sea adventures — including Ryoma Sakamoto, who gained independence from navy commissioner Katsu Kaishu at Kobe Naval Training Center during the final years of Tokugawa rule in the Bakumatsu period (1853-1868). In the work, four statues representing young men, as well as women who supported and fought alongside them are depicted in an abstract style. Standing proudly at approximately 4 meters in height, the sculpture is made out of white granite. 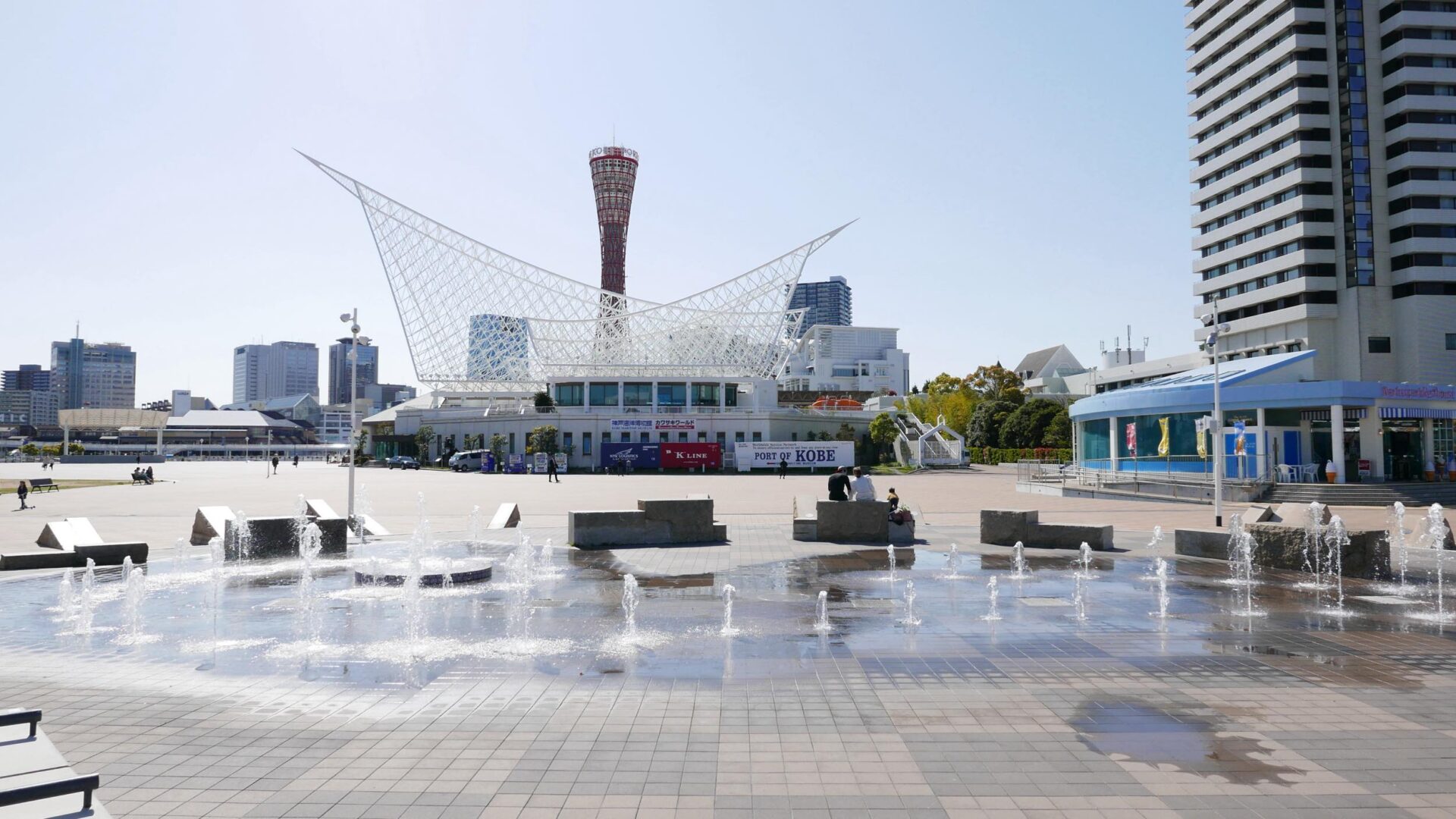 The Fountain Square was built in the newly renovated Meriken Park to commemorate the 150th anniversary of the opening of the Port of Kobe. As a space for relaxation, this facility allows visitors to play with water and enjoy the water views. At night, light shows combine music and LED illumination. 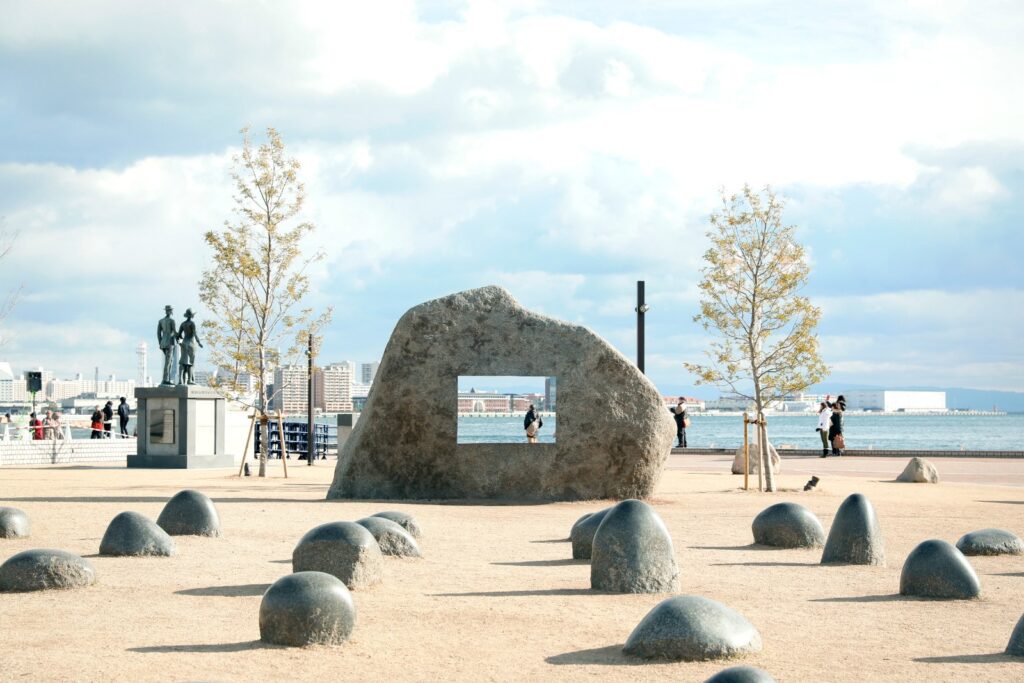 The Meriken Theater Monument was built in 1987 to commemorate the opening of the theater. The stone monument features a rectangle cut-out resembling a movie screen. In front of the screen, several stones are lined in place of an audience. The names of Japanese and foreign movie stars selected by film critic Nagaharu Yodogawa are carved into each stone. 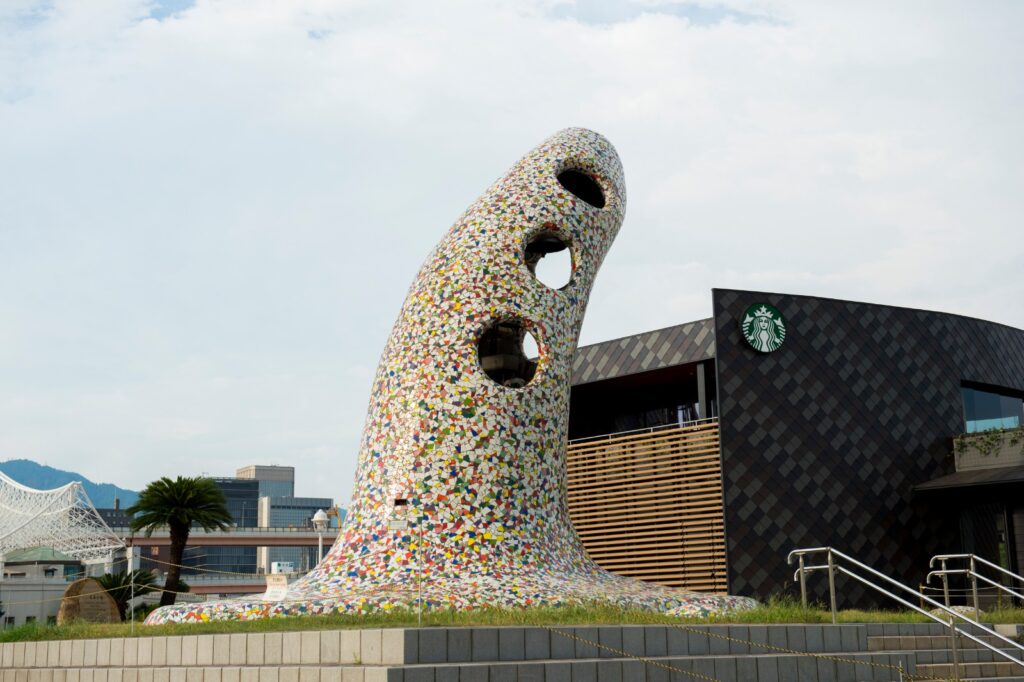 This monument was established to commemorate the opening of the first Kobe Fashion Festival in November 1989, which was part of the World Fashion Festival ’89. With the support of the Japan Lottery Association, the Bell of Hortensia monument was completed on June 19, 1990, to symbolize Kobe as a fashion capital. The sound of the bell from that time can be heard here in the app. 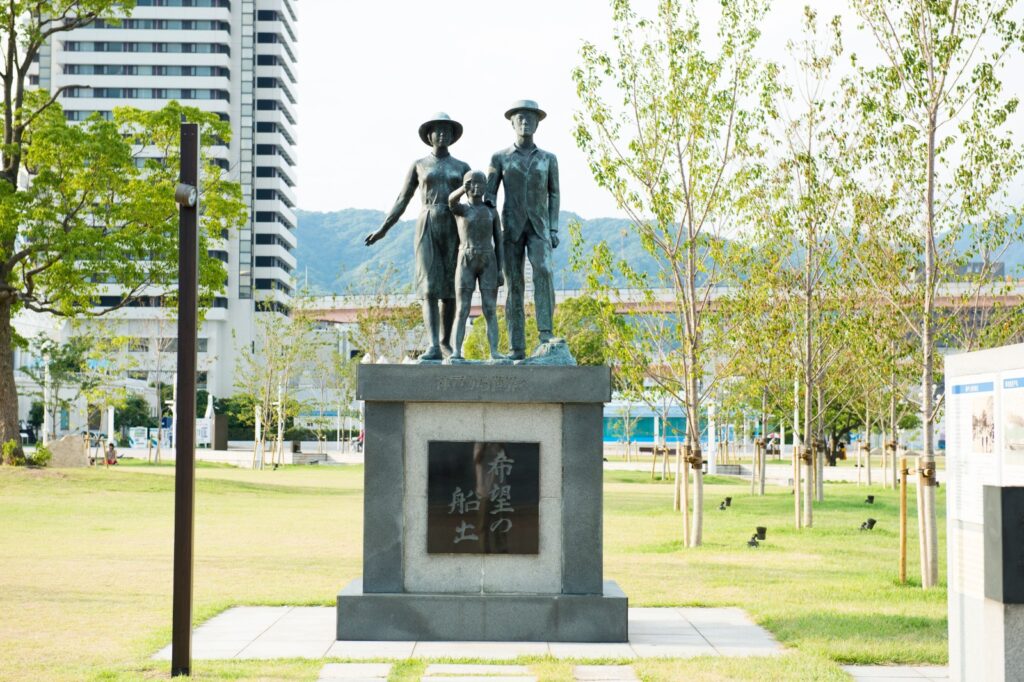 This monument was built to commemorate the achievements of emigrants who set sail for Santo, Brazil. It was erected on April 28, 2001, which marked the 93rd year since the ship’s departure. On April 28, 1908, the first group of 781 migrants boarded the ship Kasato-maru from the Port of Kobe. The monument — a bronze statue — is modeled after a family of three, who are boarding the ship and looking out to the sea. At the base of the monument, the engraved words “Embarkment of Hope” can be found, and to the side, one can see a reproduction of Kasato-maru leaving the port. 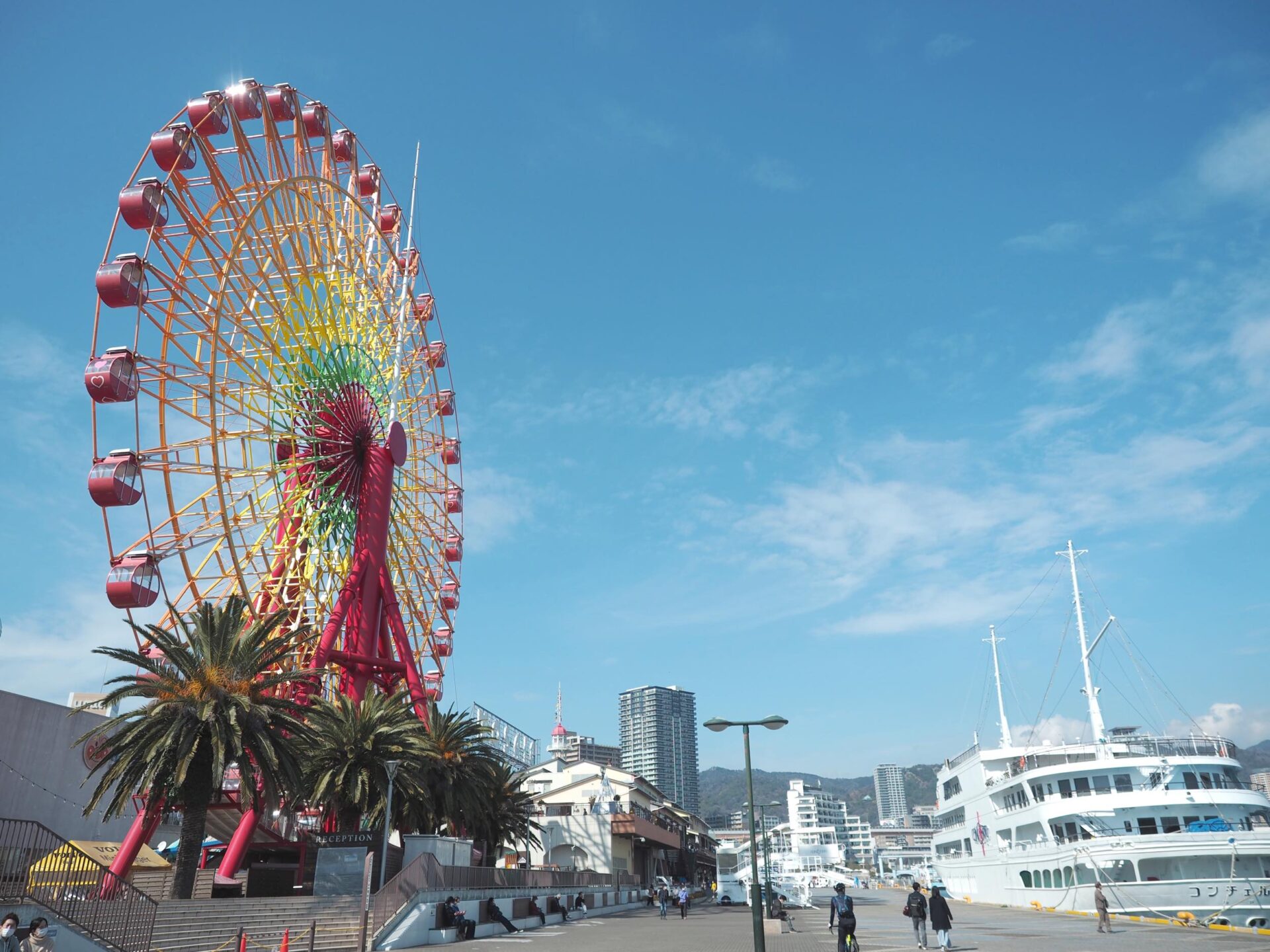 The Mosaic Ferris Wheel offers 360-degree views of Kobe. Featuring gondolas equipped with air conditioning in the summer, popular characters such as Anpanman and cute illustrations of Dokin-chan for “Dokin's Heart Cafe Gondolas” have made an appearance. At night time, alluring views of Kobe offer entertainment for adults and children alike. 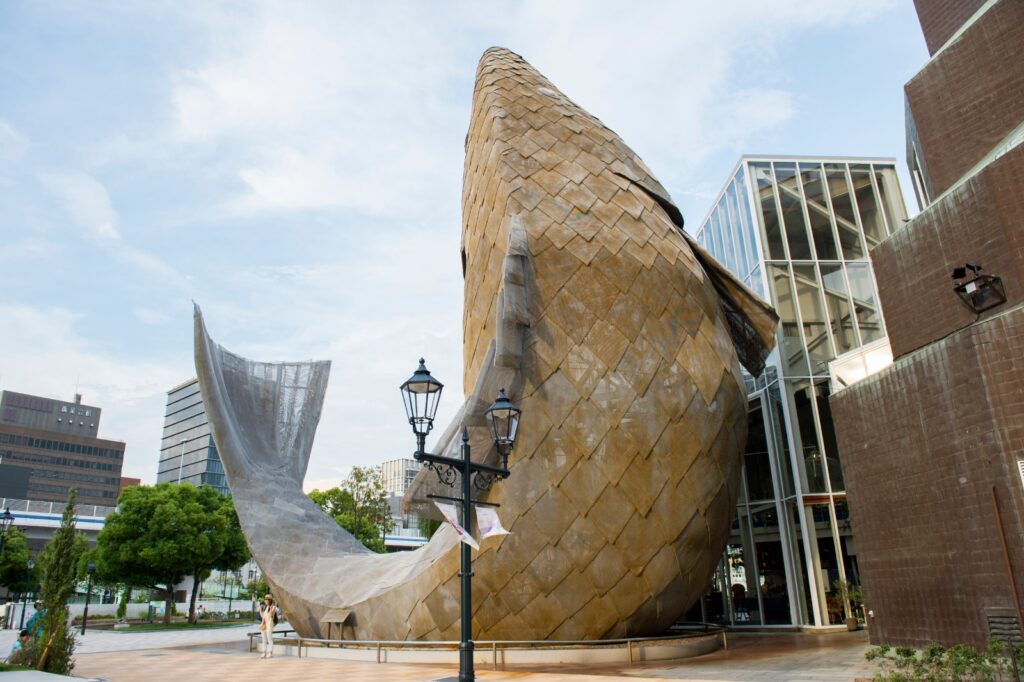 The commercial building Fishdance was built at the mouth of the Koikawa River with the completion of Meriken Park in April 1987. Taking the carp as a motif, this monument depicts the lively appearance of dancing carp. The monument is designed by the renowned American architect Frank Gehry with the oversight of Tadao Ando. Standing at 22 meters high, this sculpture is constructed using a chain-link mesh. The building itself takes its imagery from a coiled snake, creating a spiral tower structure using lined metal panels and copper plates for the external walls.

In 1903, pine trees were planted on Mt. Ikari in the shape of an anchor to commemorate Emperor Meiji’s visit on the occasion of the Fleet Review. The mountain’s permanent illumination came in 1981 when solar and wind power was installed on the occasion of the Kobe Port Island Exposition. Currently, surplus power generated throughout the day is sold off to Kansai Electric Power Company and the power is sourced through the company at night. The illumination on Mt. Ikari turns blue to mark special occasions for the people of Kobe. This was devised in 2003, in commemoration of 100 years since the city of Kobe began large-scale forestation on the Rokko mountain range in 1902. The color is used to express the blue in Kobe’s symbolic blue sea and green mountains.